Following the partnership with Yacht Club de Monaco (YCM) signed in February, Nobiskrug took part in the sixth edition of the Monaco Solar & Energy Boat Challenge, which took place from 2 to 6 July.

Thirty-four teams (14 nationalities) competed in the Solar, Energy and Offshore classes of the event organized in partnership with the Prince Albert II of Monaco Foundation and the International Powerboating Federation.

A key objective of the Monaco Solar & Energy Boat Challenge is to give a free rein to the creativity of student engineers and allow them to work with manufacturers to design, build and optimize new propulsion methods for tomorrow’s yachting, using only clean energy sources.

Team Nobiskrug – made up of Andrew Lea, a naval architect from Privinvest Holding (of which Nobiskrug is a subsidiary), Jan Luerkens, a naval architect at Nobiskrug, Vincent Gauthier, yacht broker at Barnes who piloted the boat during the event, and Vesna Blötz, Manager Marketing & Communications at Nobiskrug – competed in the event’s Energy Class, which YCM introduced in 2018 to compare clean energy sources such as electricity and hydrogen.

The Nobiskrug team’s third place in the endurance race between Monaco and Ventimiglia in Italy greatly contributed to its third position in the overall ranking of the Energy Class. The race was open to boats in the Energy and Offshore classes. Team Nobiskrug also competed in the slalom and championship races, both of which were organized for the Solar and Energy classes.

At the prize-giving ceremony, the Nobiskrug spontaneously decided to donate its 1000 Euro prize money to Solarboot Team Emden, composed of students from the University of Applied Sciences in Emden, Germany. Solarboot Team Emden came third in the Open Class of the Solar category.

If you have any questions or require more press information about our shipyard, our group or current projects, please contact us via e-mail. 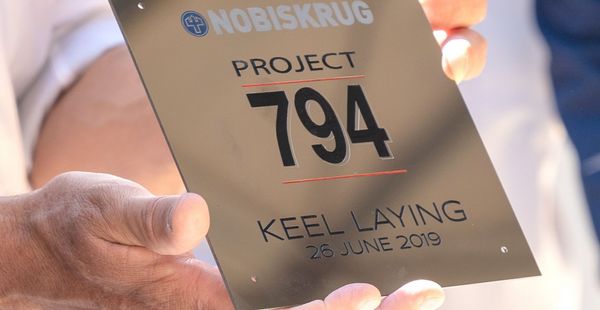 Project 794 is cruising to the finish line